We finally started our journey to Colorado where we plan to reside for the summer.  It took us over a week to get through Alabama and 2 weeks to get through Tennessee.
Believe it or not, some of our most difficult driving since the start of our trip has been on the hilly roads surrounding 2 Alabama State Parks-Monte Sano & Cheaha (Chee-ha).  These steep roads with tight turns seemed out of character for Alabama and presented quite a challenge in our rig. 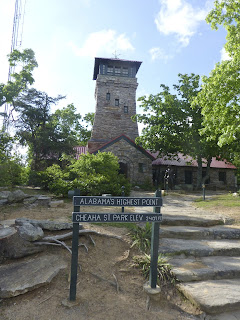 My favorite stop in Alabama was the U.S. Space and Rocket Center in Huntsville.  This facility was at the heart of our country's original space program and still contributes important research.  The stars of our tour were the multitude of rockets on exhibit, the space shuttle, and a complete replica of Skylab.  We spent over 1/2 day touring this fascinating place.  For me it was sort of like a living museum as I can recall living through all the big events regarding our space program.  Now-on to Mars!


We also visited Florence, Alabama.  Apparently, this region is famous for being the home of the "Muscle Shoals" style of music which is a blend of Blues and R&B (Funk?).  One day we went to a free concert performed by the "Muscle Shoals Brass."  This was a semi-famous group from the 60's & 70's.  They played on over 300 albums and toured with and backed-up some huge musicians such as John Lennon, Elton John, Willie Nelson, Paul Simon, etc.  It turned out that no music was played at the "concert" as it was just a Q&A session with the band.  The Q&A was lively and interesting. However, there we were in the 2nd row of a standing room only audience and we had never heard of these guys.  After the session we felt compelled to purchase one of their CD's just to figure out what everybody was so excited about.  The interesting thing was that 2 days later and over 100 miles away from Florence while listening to the Muscle Shoals Brass and traveling down the Natchez Trace National Scenic Parkway we stopped at the Visitor Center.  Standing right next to our rig was Harrison Calloway, one of the stars of the group.  Of course, we had to talk to him and he was elated to hear that we were listening to his music at that very instant.

Now on to the "fun" part of our journey.  Nashville is in the center of Tennessee and Memphis is at Tennessee's western edge.  They are separated by 200 miles.  Yet their music is entirely different.  In "The District" section of Nashville, you can't walk 50 feet without stumbling onto another music venue playing some variety of country music.  While on Beale Street in Memphis you can't walk 50 feet without stumbling upon another music venue playing some variety of the blues. Both towns are really cool but Nashville is a lot larger and our favorite.  The bad news was that we showed up in Nashville on Memorial Day weekend and every campsite for 60 miles was full.  We ended up finding a spot at the Nashville Fairgrounds where a giant tag sale was in progress.  The tag sale attracted approximately 500,000 visitors and our campsite was smack in the middle of the chaos. Not the most scenic place, but certainly interesting.


The Nashville music scene is non-stop and it is true that just walking down the street you can see some famous musicians.  We saw Ray Stevens and 2 of the Gatlin Brothers.  Nancy even took country line dancing lessons at The Wild Horse Saloon.  I sat watching Nancy's dance moves while eating southern fried chicken prepared "Nashville Hot."  Boy did I ever pay for that cuisine choice later that night and into the next morning.  (Those rocket blast offs were nothing compared to the heat I was blasting-YIKES!)
Of course, if you are in Nashville catching a show at The Grand Ole Opry is a must.  The show is a live radio broadcast featuring several styles of Country/Western music.  Not all the music was "our taste" but to attend a show at this famous facility is really special.
Next it was on the Memphis.  For us the only reason to go to Memphis was to tour the home of "The King"-Graceland!  Elvis was clearly an over-the-top decorator with really outlandish taste.  This guy loved his toys and his flamboyant lifestyle.  We did the complete tour which included his home, his cars, his outfits, heaps of his videos, and his gravesite.  However, when we finished our tour we felt an overwhelming desire to hear a little Elvis music.  I found it interesting that it actually took more time to visit Graceland than to visit the US Space & Rocket Center--hummm.

While in Memphis we also visited the National Civil Rights Museum.  The museum was located on the site of the Lorraine Motel-the place where Martin Luther King was assassinated.  The museum was dedicated to all forms of civil rights issues, but its prime focus was on MLK.  This was a fascinating experience for us.
Memphis turned out to be far more interesting than we imagined.  From its non-stop music, to great museums, and interesting things to do, it was well worth the visit.
ENJOY!